You are at:Home»Lifestyle»How Do You Perceive Yourself? The Key To Potential 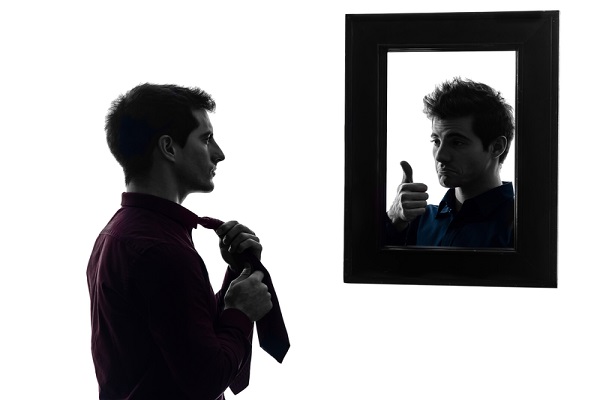 How do you perceive yourself? Mirrors are complicated. Yes, they do give a precise portrayal of the way you currently look. Yes, they aid in putting on a tie, rehearsing your smile, and shaving – all of which are quite practical. But the problem is they only allow you to see yourself right there in the present.

A mirror won’t show you what you’ve overcome or where you’ll be going. They won’t log or monitor your progress and they aren’t concerned with your vision for the future. This is the reason many struggle with creating their identity around where they currently are.

We believe that our past predicts what we can do in the future, and we resort to playing the victim to bad luck. We lose belief in our true potential, all because the mirror reminds us of where we’re at right now. But in actuality, how you view yourself is absolutely linked to your future potential.

Getting the relationship you desire isn’t based on past experiences where you struck out, and just because you’re not jacked right now doesn’t mean you can’t get there. You may need to eliminate 3AM pizzas and large pops to achieve that.

You may be working the same entry level position you’ve had since graduating college and think that you’re just a hamster on a wheel going nowhere, but your Fortune 500 dreams and business idea isn’t null and void.

When you glance in the mirror do you think of the possible victories, or are your eyes fixated on problems to such an extent that you don’t see any possible way to come out on top of things?

The founder of The Social Man, Christian Hudson, talks more about this in one of his best-selling programs (you can learn more about his programs and FREE chapter offer here).

Not only does he break down the art of storytelling and how it is pertinent to your life, he also explains how to effectively process your past experiences and place value on yourself through overcoming doubts.

All pillars necessary to achieve your dreams.

Christian alludes to how reaching the levels of success we’ve always dreamed about starts by reshaping how we view ourselves. That begins with you.

Our Past Is Just the Past

A huge part of how we view ourselves is what we’ve experienced in the past. Maybe you performed horrifically as a sophomore so you jump to the conclusion that you’re a ‘poor student’.

Maybe you missed the final cut in tryouts and suddenly you’re not a good player. Or you were involved in a motor vehicle accident and now you think you’re a lousy driver…

Mishaps always occur. If you haven’t yet realized this, let me tell you now that you’ll be guaranteed to face difficulties and obstacles ahead on your path to where you’d like to end up.

This is why drawing conclusions about your abilities based on one lousy tryout or semester isn’t helpful or accurate.

The way you view yourself is crucial because it’s the initial step to becoming the person you’d like to be. Without positive views about yourself, you can’t see yourself turning into and experiencing what you’ve always wanted, and you’ll lack the inspiration necessary for it to happen.

Whether it’s sexual performance, excelling at your job, or completing a silly Rubik’s Cube, letting the past define who you are will never allow you to advance and conquer them.

We are responsible for believing in ourselves. In a fake-it-til-you-make-it type manner, we must base our actions on where we want to be, and not on the place we’re currently at. Doing this propels us into taking the necessary action to ultimately get to where we’d like to end up.

Guilt blurs our self-perception while stunting our potential if we allow it to. As stated earlier, our life sooner or later brings uncertainties which knock us in one direction or another. The choice of how we react is entirely our own.

In life, there are people who make sure things happen and those who are watching things happen. When we’re being reactive – as in addressing our shortcomings and not letting them shape our perception of ourselves – control is gained over our circumstances.

Too many people play the victim role, giving into their situations. Stephen Hawking got dealt a woeful hand, but was able to see past his disability.

Ray Charles dealt with poverty and racism growing up, yet decided to play the piano before he became blind. He could have just accepted the fate of his blindness, played the victim, and allowed his circumstances to define him, but he saw himself doing more.

Once you start viewing yourself the way you’d like to be, and start doing what you’ve always wanted to do, you’ll be shocked at just how far you can go.

A few years back I watched a college football national championship game where the defending champions were heavily favored to win again. The favorites were much faster, stronger, and more athletic.

However, the team that was more gifted with natural talent lacked the heart and determination of the underdogs.

The game was close the whole way through, and the underdogs, while well-coached, relied on winning ugly. They capitalized on sloppy mental mistakes which were often made through their opponents’ lack of effort and focus.

The game ended up going into overtime. For a few seconds it looked like the defending champs had won. However, a critical penalty was called against the favorites and the game went on. The underdogs still had life thanks to a mental error by their opponents.

And they managed to pull things together and win the game. It was the biggest upset in a national championship football game.

The lesson to be learnt is that when you’ve got that belief in yourself, you can overcome even the greatest of odds. They don’t say it’s important to cultivate the heart of a champion for nothing!

Andrew was born in Canada in 1980, and has been focusing on self-improvement for more than 15 years. When he's not busy working or putting his dating & relationship skills to use, he enjoys playing sports, reading books, and practicing spirituality.